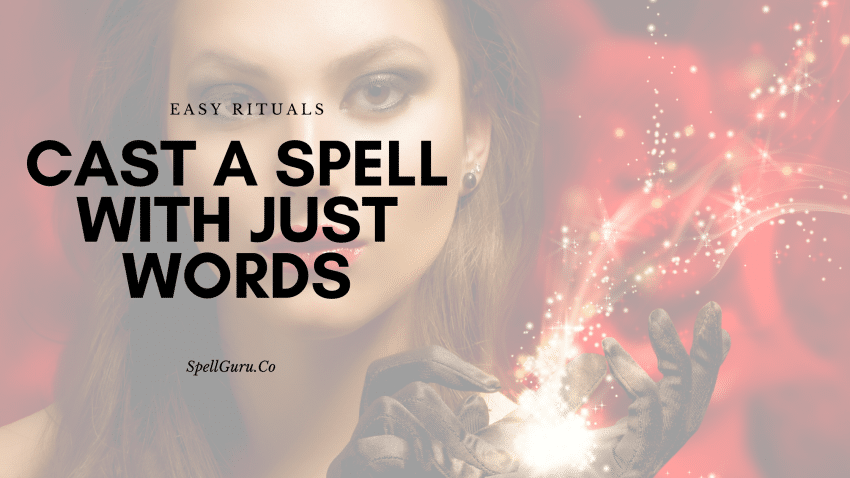 We have many spells here on the site which requires various ingredients and complex rituals but we do also cover how to cast a spell with just words. Spells use ingredients and ritual items to charge and release your intentions into the universe.

Now, please don’t misunderstand. Ingredients and ritual tools are important and they’re used for a reason. If you really want to see potent results from a spell designed around the use of a sigil then you should try to substitue ingredients and items rather than completely removing them.

But it is certainly possible to cast a spell with just words.

Before we begin, whether you’re casting a spell with words or an entire prepared ritual, consider taking our magick ability test. We can help you pinpoint your strengths and help you on your witchcraft journey.

Not all spells can be subtitued but a spell using the energy from cinnamon could be swapped for another high energy herb or spice, a honey jar spell doesn’t actually need to be in a honey jar and if a spell calls for a specific candle you can always swap it for a simple white candle.

Many (almost most) of our spells on Spell Guru can be done with general household items so it’s not like you’d have to go out of your way to find them. Swapping ingredients is preferable to completely removing them – but that is an option too.

No Ingredients At All

If you’re going to do this I suggest removing the ingredients from a spell which only makes use of them and doesn’t entirely revolve around them. Many spells use chants and an item like a altar or candle to hone your intentions and energy but you could cast them with just words.

I’ll include a couple of examples of spells you could cast with nothing but your voice.

When you’re trying to cast a spell by using just words, you’re doing an incantation. Any kind of spell is really just a method of releasing your intentions into the universe. The ritual might involve dozens of people and a lot of equipment, a single candle or it might just be a spell chant yourself.

In case you’re wondering, using incantations to cast spells is just as powerful as using any other ritual. When it comes to how powerful casting is, it’s not so much about the process as it is about the intention behind it, in fact. That means that if your intention is strong, your spell is going to be strong – regardless of its particular form.

Your spellcasting draws power from your clarity when it comes to what it is you want to see manifesting, and your determination to see it done which invests that spell with magic, energy and focus. You will it into existence by using your words and the sheer power of your magic.

You can see some of our covens spells with just words and no ingredients:

How to Cast Spells With Just Words – What Incantation to use

If you’re not sure which way to go, consider your particular circumstances. Do you have any witches or covens close to you, physically or spiritually via the online world? If not, then consider the fact that you might not have access to a real tried and true incantation for your particular spell. While you can find different such incantations online, you need to be able to trust the source and verify it before actually using it.

If you’re improvising rather than using trusted sources for the incantation, then you’re better off making our own version of the one you come upon, or simply making one from scratch.

The safest way to cast a spell with just words is coming up with your own incantation. By formulating your own spell, you’re taking out the element of uncertainty or doubt when it comes to its design.

Some might even say that it’s way easier to come up with your own incantation, in fact. It doesn’t need to sound fancy or Latin at all, even though that makes spells cool for sure. But what you’re going for here is not wow factor – it’s clarity and power of magic manifestation.

After all, no one knows your heart and desires better than you do. You’re the best candidate to speak on your desire to come true. If coming up with your own incantation sounds daunting, let’s take a look at a simple process to compose one.

Now that you have your weapon of choice, so to speak, let’s move on to the next step of casting your words-only spell.

Spells With Just Words– The Key to Successful Casting

Armed with your spell, clarity of intent, and spiritual and magic help, you’re now ready to cast. 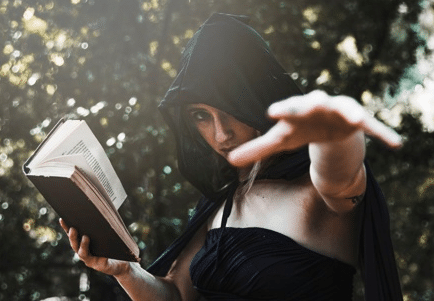 Choose your timing and start speaking your incantation into existence. Keep in mind that it will be as powerful as you make it through your intent and repeated investment of magic and energy.

Come up with your ritual for casting it and repeat it until you feel you’ve loaded it with enough magic. Soon enough, you’ll see the results coming in.

Tried and True Incantations for Spells With Just Words

If you’re part of a coven or a witchy community, you might have a go-to spellwork study group or mentor to ask for guidance. You could get tips and incantations that are tried and true for your mentor or fellow casters, truly understand and process their intent and ritual behind it, and then use it yourself.

If you have access to resources on spells but no direct contact with the author of an incantation, it may be better to study the spell as presented and process it for a while. Then, when you feel you’ve understood its core essence, make it your own by personalizing the key aspects.

Why is that important? The whole basis of using an incantation is the fact that there’s great power in words and the magic and intent which goes into them. As a result, a ready-made incantation that is not your own is infused with intent and power by its maker. It’s a bit like trying to use new appliances without having an instructions manual: sure, you know what you want it to do, but what is designed to do?

By adapting the incantation, you give it your mark of intent and power, and you make sure that it’s working for you and in the way, you desire it to.

If you’re not so sure about the incantation, or if it’s some complex formula that maybe uses some foreign languages too – like say Latin – you may want to do some more research. You need to truly understand the words and intent of an incantation you’re not coming up with entirely on your own, and if you’re not sure, then just look for another spell to use as the basis for your own version.

We’ve got some easy love spells on the site you can use but as with any kind of spell cast, writing your own can be the most effective.

When Should You Use More Than Just Words?

There are situations where a ritual may call for more than just words in your spell. Sometimes it can help focus your intent but it doesn’t have to be overly complicated. The example here as well as many of the spells we have here on the site can be done with household items or things you can pick up easily from a supermarket.