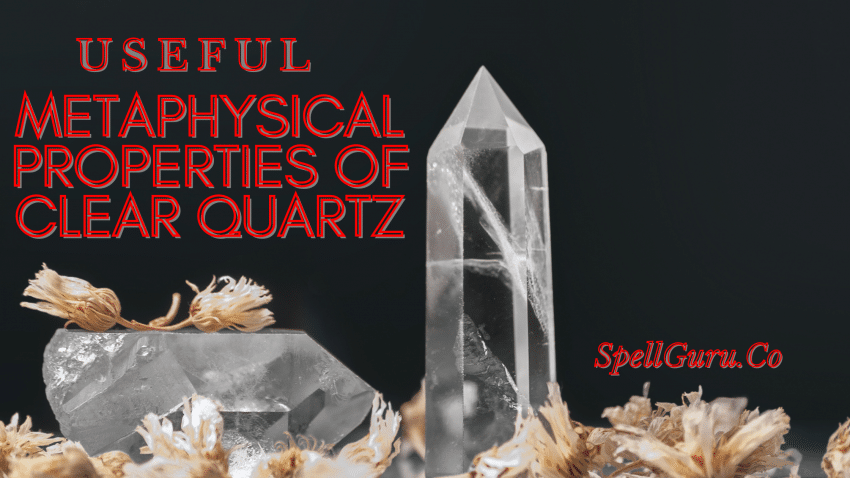 Truly understanding the metaphysical properties of Clear Quartz allows you to unlock the crystals full potential. A quartz crystal is one of the most abundant and well-known crystals, named by many as the “master healer” of all the crystals.

Clear Quartz is believed to absorb excess energy and regulate the energy in its surroundings, offering it owner extraordinary energetic benefits to their emotional, physical, mental and spiritual health.

Let’s get into the metaphysical properties of Clear Quartz, the history and (most importantly) the benefits and uses for one of the most fascinating stones in the crystal world.

Clear Quartz is sometimes referred to as the “rock crystal”, and is characterized by a completely colorless appearance. There is a wide range of variations of Quartz that have a colored appearance, such as Rose Quartz, Amethyst, Smokey Quartz and Rutilated Quartz – but the colors in many of these variations can be attributed to impurities that become embedded in the crystal’s structure. Clear Quartz specifically has a plethora of unique properties associated with it, and here’s a brief overview:

Hardness: 7 on the Mohs scale

Quartz crystals are often used as a catch-all stand in for basically anything. For example, I’ve often seen them used as a crystal to absorb negative energy and while they can be used for this you’re better to use something more specific (like smoky Quartz in that case).

Every crystal has its own unique energetic properties, and Clear Quartz is especially great for energy amplification. This makes it the perfect addition to meditation, spiritual communication, prayer, or ritual intended to expand on your consciousness, as it will take your positive intentions and reverberate them further through the universe. The crystal is also believed to help its owner attract love, friendship, abundance, peace and vitality, so many choose to wear it on their person each day on jewelry.

Clear Quartz is also put to practical use in our everyday lives due to its ability to transform pressure and heat into electromagnetic energy, but also to store energy. For this reason, the crystal is often used in memory chips, smartphones, computers and many other electronic devices. So, whether or not you choose to harness a raw piece of Clear Quartz’s ancient energy to attract more positive surroundings, you’ll probably still be benefiting from the power of this unique crystal in some areas of your life.

The Metaphysical Properties of Clear Quartz

Clear Quartz offers its owner some distinct metaphysical properties that can be helpful in everyday life, as well as for meditation, prayer, yoga and more. These properties can be described as:

When it comes to Quartz’s metaphysical properties, many shamans and spiritual healers consider it to be a precious gift from Mother Earth that facilitates transformational healing and protection. Every cut of Quartz is different, in its shape, its clarity, its quality, its luster – they are all unique, and many people believe that it will attract the owner that needs its guidance most.

Owners of Clear Quartz can harness its metaphysical powers by wearing it or carrying it in their pocket or bag. The closer it is kept to your body, the more positive effects you will feel in your mind and spirit. Those who wear the crystal believe that they have a more awakened mind, spirituality and consciousness, and they believe it helps them on their way to personal development and emotional growth. Continued meditation with Clear Quartz has also been known to harmonize the spirit with a higher power and divine energy.

The History of Clear Quartz

Clear Quartz has been appreciated for its beauty and strong metaphysical, energetic powers since the beginning of humankind. In fact, almost every ancient civilization had their own admiration and beliefs about the stone, utilizing its positive energy for meditation, personal development, spirituality, and even physical health.

The name “quartz” comes from the ancient Greek for “ice”, and philosophers thought of Clear Quartz as a type of permanent ice, and later Middle Age clairvoyants used it to make crystal balls for seeing into the future. Each era in history has held their own beliefs about this ancient stone, and today Clear Quartz continues to be used in a similar way by modern spiritual healers who harness its power to find higher guidance, achieve spiritual growth, and contact spirits.

Clear Quartz is not a birthstone associated with any of the signs of the zodiac, although it’s distinct properties make it useful for a number of the different zodiac signs. For instance, the stone’s energy amplifying qualities make it ideal for helping a Gemini become more tolerant, it’s calming and energy-balancing properties can help a Capricorn with their natural stubbornness, and its ability to boost energy could help a Leo that is feeling burnt out.

However, whichever zodiac sign you were born under, the crystal will still offer you a string of energy-transforming, metaphysical and physical benefits.

The powerful energy amplifying properties of Clear Quartz makes it perfect for chakra healing. The stone is able to vibrate at the frequencies of all colors, so it is able to harmonize with each one of the chakras, amplify the powers of the other crystals, and it will maintain alignment throughout the process of meditation. Out of all the chakras, Clear

Quartz is most closely associated with the crown chakra due to its ties to the angelic realm and higher powers. When the crown chakra is off-kilter it can cast a dark shadow over the rest of the body, mind and soul. Therefore, Clear Quartz can be used to heal the crown chakra to quickly achieve clarity and balance that is both mental and spiritual.

Now that you know all about Clear Quartz’s metaphysical qualities and have more insight into harness them for yourself, hopefully you can find a way to integrate the stone into your life and make the most of its potential for light, positivity and connection.